Civil War
General Crittenden commanded one of the Union Corps making its way to Murfreesboro by way of La Vergne. On December 26, 1862, the corps was one mile north of La Vergne, a small community with few stores and a railroad depot sitting in the center of town. Gaining the depot was an important part of the Union Army plan to conquest the Confederate soldiers of General Braxton Bragg because the Union would be able to move supplies and men closer to Murfreesboro.

Crossing through thick tanbles of cedar in the Hurricane Creek, the Union soldiers moved closer and closer, but 2500 men and a battery of artillery were waiting for major engagement. With more and more soldiers coming to both sides, the skirmish became house to house combat with Confederate soldiers firing from windows and doorways.

When the Confederate soldiers eventually retreated, their losses were minor and it was considered a victory because it gave the forces more time to prepare for the Battle of Stones River, that followed a few days later.

On January 23, 1938, the following was (possibly) printed in a newspaper called the Appeal, “75 years ago. The little village of La  Vergne, half way between Nashville and Murfreesboro on the Nashville and Chattanooga Railroad, which has been the scene of many skirmishes between the Confederacy and the Federals, has at last been destroyed. Not a single building remains.”

Evidence of the Civil War can still be seen around La Vergne over a century later, but the loss of the railroad depot and many old homes of the area is still felt.

The Tornados of 1900
La Vergne had been completely destroyed during the Civil War as Union and Confederate forces fought as they approached Murfreesboro for the famous engagement at Stones River Battlefield.

If the destruction of the town the first time was not enough, several major storms hit La Vergne beginning on November 1, 1900. During that tornado, the women's college was blown away.

Another tornado ripped through the town on November 22, 1900 and the Murfreesboro News Banner reported, “No one who has not witnessed the terrible - can realize fully how devastating it was. What was a beautiful little town is now nothing but an immense pile of kindling.

“… The tornado struck the center of town covering a space from the residence of J.R. Park, the station agent, beyond the residence of Mrs. Wright who runs a boarding house on Murfreesboro Pike.

“… Only one lantern could be obtained and the only way rescuers could find the unfortunate ones was to locate them by their screams and groans of anguish.”

In the 1930s, there were but 2 bathrooms in the entire city. Because of the depression, it was many years before more bathrooms were built. Country dances were the highlight of the social season. When word got out that a dance was planned a crowd always gathered. Typically the family of Nelson Mullins (a railroad section foreman) would provide music. His four sons Wesley, Walter Lee, George and Clyde played instruments and daughters Audrey, Maybelle, and Lillian played instruments and sang. 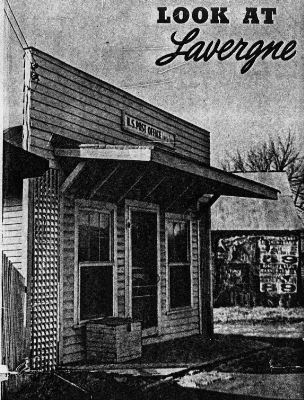 Buildings located in the heart of La Vergne were Arnolds Store (with Marcus Greens Star Lunch Room), Joe Goodmans filling station (then used as a pool room), Waldron Store, Seatons Garage, and the La Vergne Post Office. Mail was often brought to the train depot by W.T. Chockley (Mary Goodman) who would harness her pet goat to a small wagon and carry the mail bags to be attached to the “arm” at the depot.

La Vergne also operated a four-room school that had two grades for each teacher. One of the PTA leaders was named Mabel Mason, who now has a street in Lake Forest Estates named after her.

For clothing, women received patterns from Agricultural Extension Services and the dresses and suits were made from the linen-type material of feed sacks.

There were no paved streets in La Vergne at the time, so after a heavy rain Stones River Road and Rock Springs Road became impassable.

Train Wreck of 1934
There was a devastating train wreck on July 9, 1934 in which the bodies of 13 hobos were supposedly removed.

Legend has it that not all the people killed were removed from the scene, so for years afterwards body parts would surface. However, this is has not been confirmed but the legend lives on. Here are photos of the train wreck from local newspaper accounts.

The text says: Knights of the Road went in all directions, five of them to their deaths, when these freight cars left… (unintelligible)

Photo caption says: The above is an air picture of the wreck of a N.C. and St. L. freight train in La Vergne in which a score cars derailed and jammed together when the wheel carriage of one car came off, letting the frame work drop to the track. A half dozen hoboes were killed in the wreck, out of the half hundred or more known to have been aboard. The cross-mark on the picture shows where the carriage broke loose that caused the wreck. Two Milton youths were in Nashville on July 9, the day of the wreck, and they flipped a coin to determine whether they catch this train or come home on the highway. The highway won.

Photo caption says: Cause and effect of the derailment of 21 freight cars on the N., C, and St. L. railroad at La Vergne Monday afternoon, is shown in these photographs taken just after the crash. A portion of the splintered cars which left the rails carrying at least five to their deaths, is shown in the photo above. Rails were twisted like hairpins for about 1,500 feet. At right is pictured the truck which broken down on one of the cars, splitting a switch, and resulting in the fatal derailment. 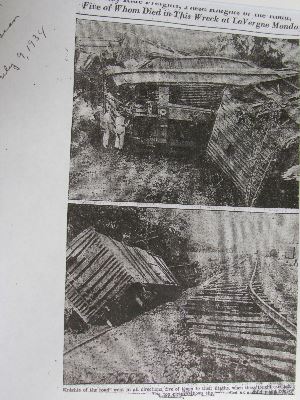 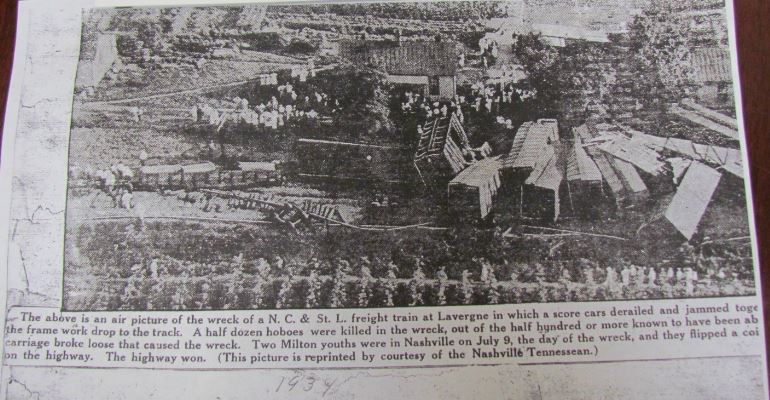 Percy Priest Lake
Following severe flooding in 1937, the Flood Control Act of 1938 was authorized by Congress. In 1946 the U.S. Corps of Engineers Division office in Cincinnati approved a dam under the River and Harbor Act. The Stones River Project - later called the Stewarts Ferry Reservoir - was approved once recreational use was approved. The name was changed by Congress to J. Percy Priest on July 2, 1958. Once funding was approved in 1963, construction began June 2, 1963 and the dam was completed in 1968. The 33,0540-acre project is managed by a natural resource management staff by the U.S. Corps of Engineers.

When the dam was built and the lake formed, several old homes in the Stones River area were lost. 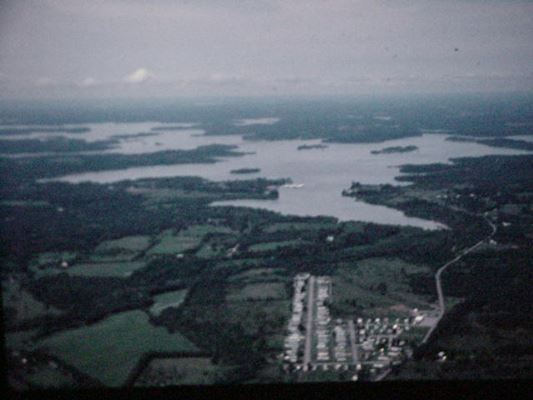 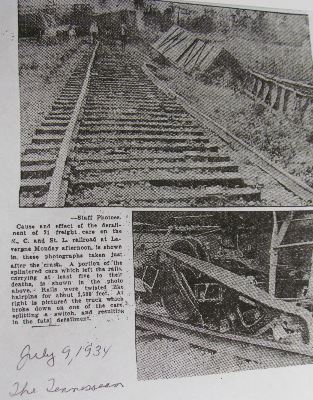